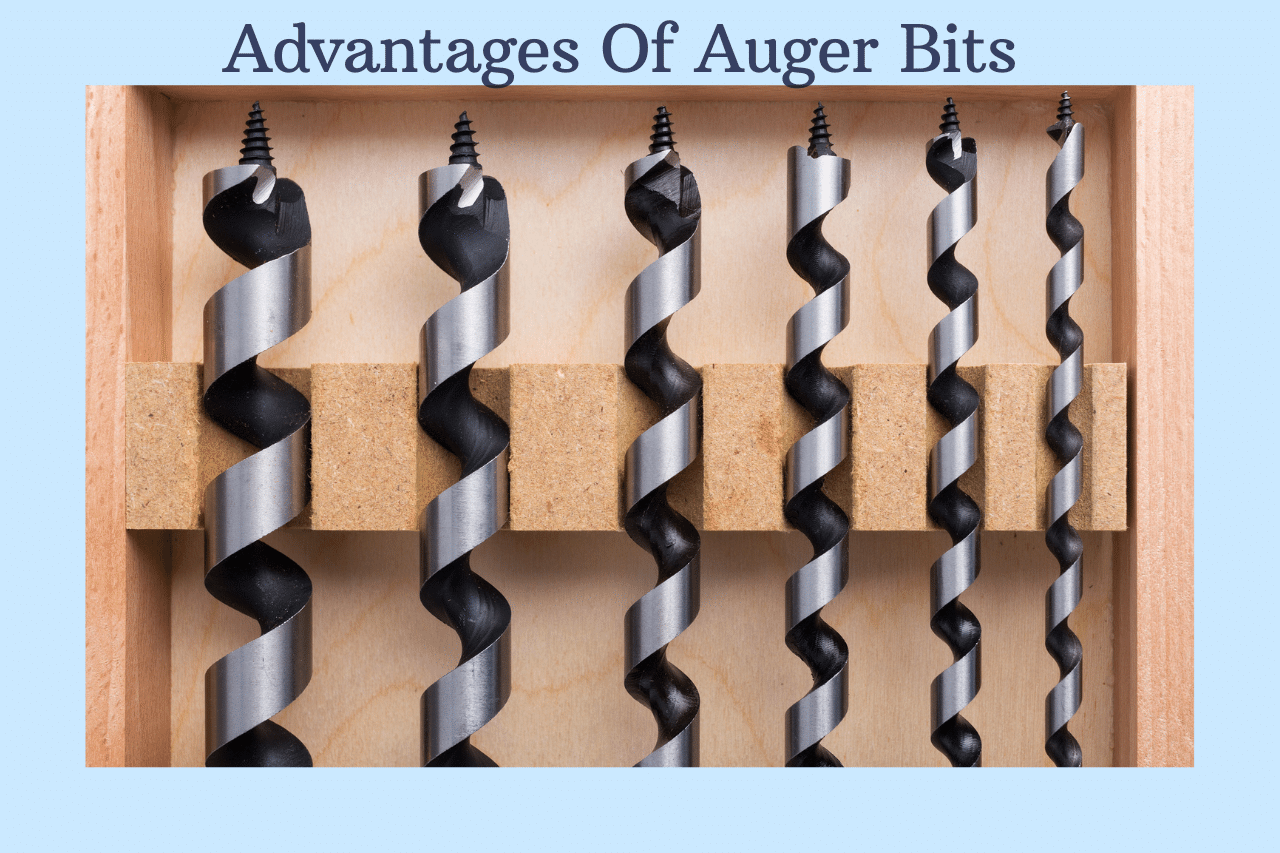 Wood auger bits do have several advantages’ in woodworking. They can drill deep holes in wood without getting clogged or jammed up. The holes that you drill will be straight and consistent from beginning to end. They work great when used for new cable or electrical wire as well.

For all wood workers who use strictly hand tools, the auger bit is going to be one your best friends since it can drill through wood without applying much force to a hand brace or power drill for that matter. they can cut holes cleaner than spades too.

The design of the auger bit is for the easy removal of material as you drill deep into wood. An industry that uses these types of bits is furniture manufacturing.

When they were first made, a portion of the bit was first flattened. Then the whole bit was twisted. This gave the auger that spiral helical look. At the cutting end of the auger is a threaded point or also known as a lead point. This part allows the auger to self feed into wood.

Above the threaded point you have two spurs to start the cutting process when augering.

The lift chisels are located at the opening of the bit and as the name implies, they lift material out so the twisted part of the bit can keep the hole clean as you’re drilling.

The threaded point can either be a fine thread or coarse thread. The fine thread is made to be used with drilling into hardwoods. The course threaded augers are made for softwoods.

The reason why there are two different types of lead screws is if you take a coarse thread and try drilling into hardwood, it can’t cut through the fibers fast enough.

What’ll happen if you use a fine threaded bit on softwoods is the flutes will clog up preventing the removal of material.

Why Would You Choose an Auger Bit?

There’s a couple of reasons why auger bits are useful. The length of the bit allows for deep boring. More so than spade bits.

The hole when done drilling is the same diameter all the way through to the end. The walls of the hole will be smoother just like when a forstner bit is used, just with a lot more depth.

You don’t have to apply a lot of force to the drill to get the auger bit to work since it’s self fed into the material. The bit won’t get clogged near as much as other bits since it’s always removing material as you go.

When Would You Use A Wood Auger Bit?

These types of boring bits really come in handy for those woodworkers who strictly work with hand tools. They can drill a nice hole with the help of a hand brace. The hand brace in combination with an auger bit makes easy work for drilling deep holes.

Some examples for auger uses are dogs that need to be drilled in a workbench. You could use it for drilling holes through parts of furniture if you’re in the business of making chairs and tables.

It’s also pretty handy when hogging out material for a mortise. Then it’s just a matter of cleaning out the sides with a mortise chisel.

Can I Use An Auger Bit in A Power Drill?

You can use auger bits in drill but you do need to run the drill at a higher torque and a slower speed. I wouldn’t go past six hundred rpm’s though.

The reason being is you want to give the bit the time that it needs to cut through the wood. By giving it a little time you ensure that the bit won’t get jammed up or clogged.

Make sure that the drill you have is a variable speed drill so you can get the torque and speed you need.

What also works well with auger bits are hand braces. Before power and battery operated drills came along, hand braces were the only tool that was able to drill deep holes. Any holes for that matter.

The first noticeable difference between an auger and spade bit is the auger bit bores holes easier. Because of the lead screw you don’t have to put very much force on the drill to get it to work.

Once the auger bit starts drilling, it will drill straight through to the other side. The spade won’t do it as perfectly as an auger will. If precision is a factor then the auger bit’s going to be your best option.

The auger bit also removes wood chips better than a spade bit does. That’s one of the reasons why the auger bit was made so that material will be lifted out of deep holes. A spade bit can’t do that.

Even the way that they cut through wood is different. The spade bit works by scraping away wood. The auger works by actually cutting and lifting it out of the way at the same time.

Even though auger and forstner bits are similar in use there are a couple of differences. Auger bits can be purchased in longer lengths. You’ll find these useful when drilling holes through 2X4’s to run wiring through or piping.

Forstner bits can’t do this efficiently since more force on the drill needs to be applied to get it to cut. It also can’t remove wood chips and sawdust like an auger can.

Forstner bits excel when used in a drill press and mainly for fine woodworking projects. If precision is what you’re looking for then the forstner bit is the right tool for the job.

However if you have a lot of holes that need to be drilled and they’re going to be hidden then the auger bit is the better choice.

An auger bit is pretty versatile, it can be used in a hand drill, a hand brace and a drill press.

Is It Possible to Restore Wood Auger Bits?

Wood auger bits can be restored or sharpened. The only way to sharpen an auger bit is through the use of a file, preferably an auger file.

The auger file isn’t your typical flat file, it actually has a nice tapered shape to it. This gives more control for getting into tight spaces of the auger bit that needs to be sharpened.

This is so you don’t damage the lead screw when sharpening the lip and spur of the bit.

When sharpening the spurs of the auger lightly file the inside edge while keeping the file flat against the inside of the spur. Sharpen just enough to where you bring back a shiny edge and all burs have been removed.

Keep in mind it doesn’t take much effort to sharpen an auger bit so don’t over do it. The more you sharpen the faster the bit will wear out.

Auger bits do have a couple of disadvantages. They don’t remove material or wood chips very fast as you’re drilling.

The lead screw can get broken off if you hit a knot in the wood. The result of this is ruining the auger bit. It can’t be repaired, you’re done.

Wood auger bits are made for drilling through wood only and nothing else which makes them not very versatile.