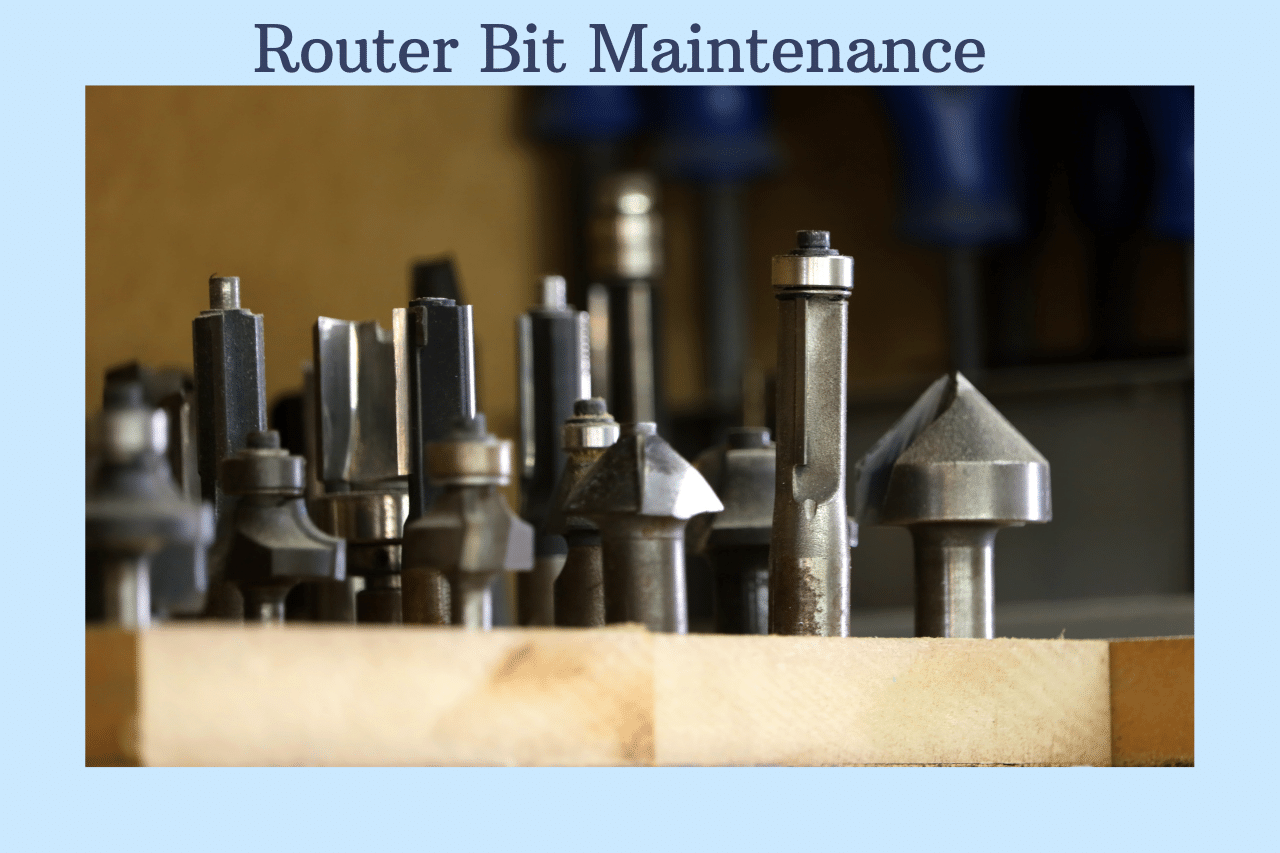 Router bit maintenance is crucial in woodworking if you want to get as much life out them as possible. Router bits aren’t very friendly to the pocket book so taking care of them will ensure that you get the maximum life out of them.

Learning how to inspect them for damage and how to clean rust off them is part of the solution. Also what matters is how you store them and why.

Figuring out when to sharpen router bits is also a factor for longevity.

What to look for when inspecting router bits is any kind of damage. Minor abrasions and small dings or chips that appear on the cutting edge can most of the time be taken out by sharpening them up. But what about the more severe chips or dings?

Those are a different story. With this type of damage you’re better off replacing the router bit. If you use a router bit that’s been damaged like this you’ll throw the router bit out of balance causing the bit not to spin smoothly.

Maintaining your router bits is pretty important in woodworking. Buying router bits can get expensive especially if you use a bunch of different ones all of the time. Learning how to care for them will make sure that you don’t spend more money than is needed.

There’s a few things that you can do to ensure that you get the most life out of every single router bit that you own.

The first thing is knowing when to sharpen bits yourself and when to take them to have them professionally sharpened.

There are many things that can dull router bits. The type of wood that you’re routing through is a factor. Especially plywood or other sheet goods that contain resin.

1.The incorrect speed on the router will also prematurely dull a bit. Too fast you end up leaving burn marks and dulling the bit faster.

3. Ever heard the saying “don’t bite off more than you can chew”? The same thing applies when using a wood router. If you take off too much at one time, the bit gets dull faster. It’s better to make a few light passes to get the profile that you want.

4. Feed rate is important to keeping bits sharper for longer. Too fast of a feed rate can cause the router to bog down and dull the bit. The idea is to feed the material just fast enough to allow the router to do its cutting.

Why Do My Bits Rust?

Rusty bits need to be cleaned after each use to prevent the build up of rust. The rust build up especially on the shank can cause unwanted vibration when in use. The rust causes the shank not to be seated in the collet of the router properly which causes the vibration.

The main thing that causes router bits and other tools to rust is humidity and oxygen. Humidity isn’t a woodworker’s friend. The severity of surface rust varies based on where you live.

How Do I Stop My Router Bits From Rusting?

Lucky for us there are some things out on the market to help prevent rusting. The best thing to do with router bits when you’re done using them is to apply a light coat of lubricant over the entire surface of the bit. This provides a barrier between the bit and humidity.

Storing your router bits in a clean dry place will help fight rust. To help with storage it’s best to buy a storage box made specifically for router bits.

Don’t ever just throw them all together in a tool box. When you do that you run the risk of damaging the cutters on the bits. They can become dinged or chipped which will change the profile when you go to use them again. it can also throw off the balance of the router bit.

WD 40 can be used to clean router bits as long as the rust isn’t built up too thick but it’s only one method. There are so many other options out there that can handle heavy rust build up.

Simple green can be used to clean up bits. Remove the bearing or bearings from the bit before you use any chemical to clean router bits.

The bearing is lubricated internally and harsh solvents or chemicals will destroy that lubricant making it useless.

Pour some simple green in a bowl and drop the bits in there for a while to soak.

Use an old toothbrush to clean off all of the build up. Kerosene can also be used to help remove build up. Soak like you would with the simple green and use a brush or old rag to wipe clean.

You can also use arm and hammer washing soda mixed with water to clean them up.

It doesn’t matter if you have router bits that are made from high speed steel or carbide, at some point they will need to be sharpened.

Router bits get dull through use and build up of resin so keeping them sharp is also part of keeping them clean.

Yes, it’s important for a few if not several reasons. Router bits should never be just thrown in a drawer or tool box just to let them roll around and bump into each other. You run the risk of the cutting part of the bit to get chipped.

With a storage box made specifically for router bits solves this problem. The system keeps all the router bits upright making it easy to see what you have. So for organization, a router bit box makes sense.

This way you store them all in a cabinet, on a shelf or someplace out of the way.

If you don’t want to buy a router bit storage system then make your own. You can make one out of scraps you have lying around. There’s plenty of videos to show you some ways that you can do that.

Learn how to maintain router bits.