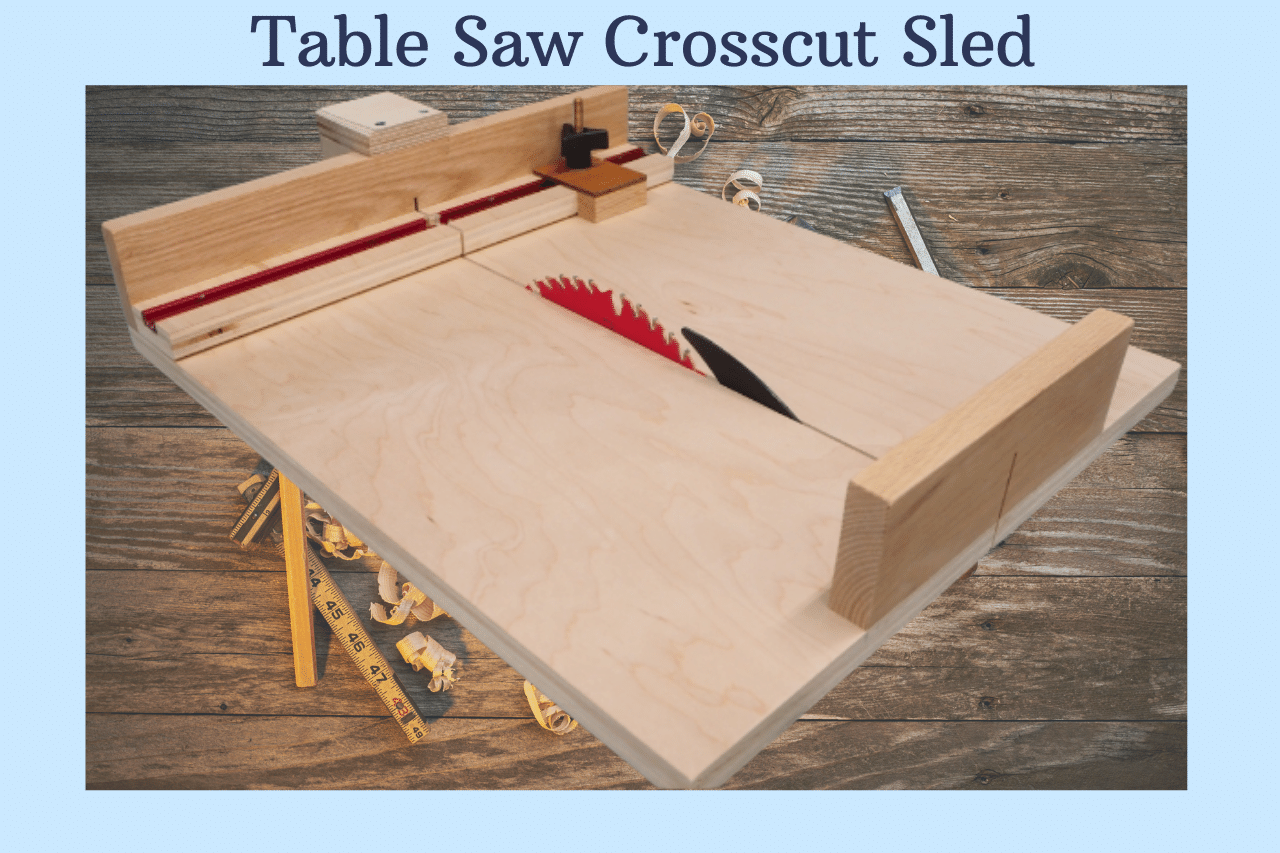 Table saw crosscut sleds have many benefits and it’s a really handy accessory to have for the table saw. Here you’ll find out what a crosscut sled is for. When to use it and why you want to use it.

The crosscut sled is safer to use than the miter gauge in some instances. Plus if you read on i’ve included the measurements of what a crosscut sled should be.

The crosscut sled and miter gauge are really similar in the way they work. They both can make crosscuts and miter cuts. There are some differences along with advantages and disadvantages.

Is A Crosscut Sled Necessary?

A crosscut sled is necessary in some instances. One of the benefits of using one is it’s a lot more accurate than a miter gauge. The miter gauge has a tendency of letting your work piece slide around too much.

This can cause your cut to be inaccurate. The reason why the workpiece tends to slide around is because of friction between the workpiece and the table. This happens a lot when you try to cut boards that have a slippery or rough surface.

The miter gauge can’t handle crosscutting materials accurately  that are too long or too wide. The weight of boards can also make your boards shift out of alignment with your table saw blade as well. The miter gauge is a good accessory to have for small projects but not larger ones.

The crosscut sled on the other hand can handle longer, wider and heavier boards. The reason why it’s so valuable is for one all the friction is taken out of the equation because the boards never come in contact with the top of the table saw.

The wide base of the crosscut sled is wide enough to accommodate wider pieces of wood. Plus the sled is designed to fit in the same track that the miter gauge does which ensures that all cuts and miters will be precise.

Another benefit of using a crosscut sled is that it can make repetitive cuts. Some sleds come with a clamp to where you can clamp a piece of wood to the fence and use it as a stop. At some point you’ll be cutting pieces of wood that need to be the exact same length and the sled makes that very easy to do.

If the sled that you buy doesn’t have that clamping capability don’t worry. You can still get the same results by using a hand clamp.

Does A Crosscut Sled Prevent Kickback?

One of the many nice things about the table saw crosscut sled is the added safety it provides. By using the sled it almost completely eliminates the chance of a kickback.

So how does the crosscut sled prevent kickback? A lot of it has to do with the way that it supports the material during the cut. The sled supports the board being cut from the sled’s base. It also supports the back of the piece that’s resting against the fence.

If you were to use a miter gauge on a wider board, there’s a chance that the board that’s being cut could shift or bounce slightly which causes kickbacks. This happens because the work piece is being pushed across the table instead of being carried.

Another safety feature of the crosscut sled is that you put each hand on the fence of the sled. When you do this you’ll notice two things. One, your hands are above the saw blade instead of inline with it, which keeps you from getting badly hurt.

The second thing is you can place your hands further apart from each other that way your hands are kept at a safe distance from the blade.

If you look at the table saw crosscut sled and compare it to the miter gauge, you can see that there is a lot more surface area to grab onto with the sled than the miter gauge.

Is A Crosscut Sled Worth It?

Only you personally can answer whether a crosscut sled is worth having or spending the money on. I personally think that it’s well worth it. I like that it makes crosscutting safer.

I also like the ease of making repetitive cuts. The accuracy is better with the sled on those wider and thicker boards.

Sleds come in various sizes depending on the person using it. Keep in mind that the bigger the sled, the more of a pain in the neck it’ll be to set it up on the table saw. If you want a good all around dimensions you can go by this:

Can You Use A Miter Gauge as A Crosscut Sled?

Even though they perform the same job as far as crosscutting and cutting miters doesn’t mean that you can use the miter gauge as a crosscut sled. As long as you’re cutting narrower and thinner wood you should be fine using the miter gauge.

I also wouldn’t get out the crosscut sled just for a few cuts either as long as the material isn’t too thick or wide. Anything wide, thick or long you’re gonna want to use the sled. It’s better safe than sorry.

What is the Point of A Crosscut Sled?

So to recap, the point of having a table saw crosscut sled is:

Learn what a crosscut sled is and why you should have one.