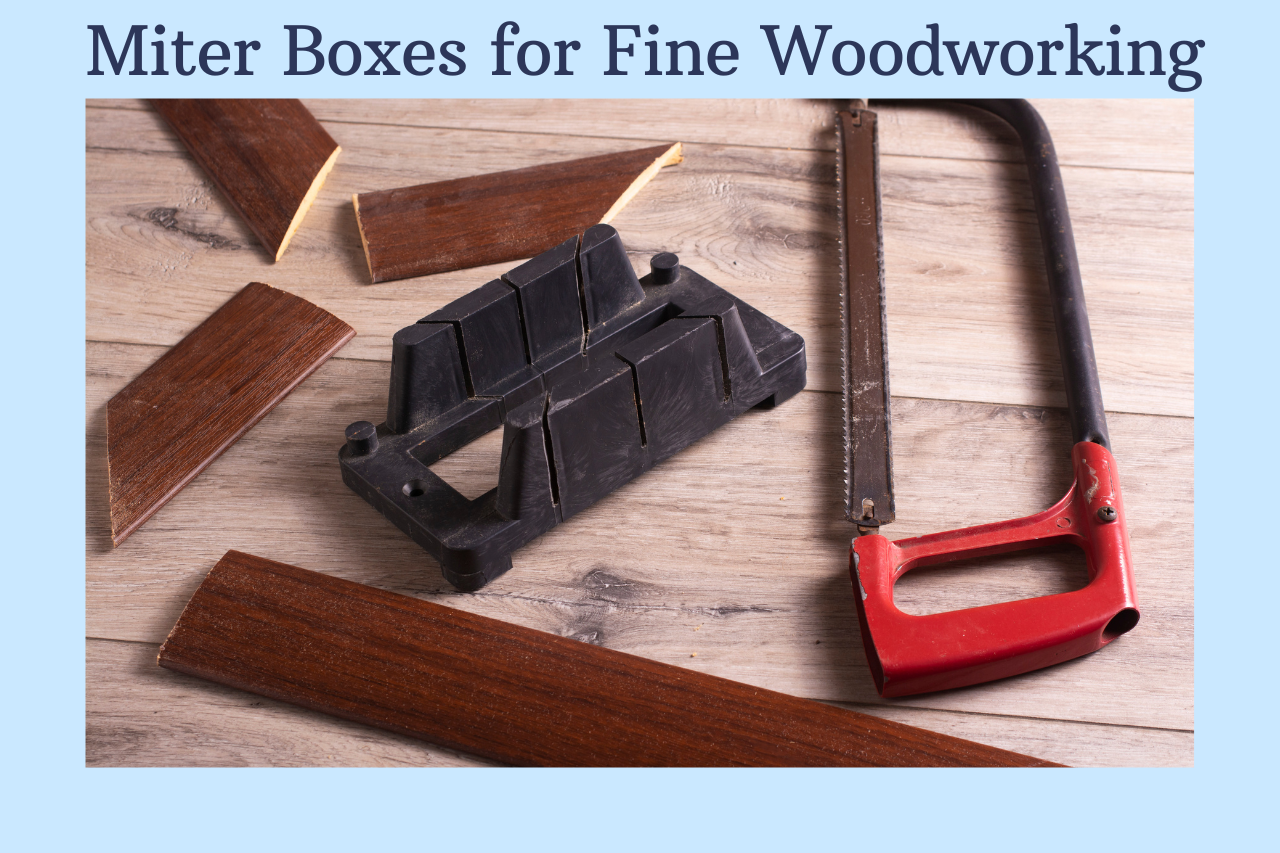 Mitre boxes are a great tool to have in the workshop especially if money is an issue. You can cut any style of trim, baseboard and moulding with a miter box and saw that you can with a powered miter saw. It does have limitations to what size of material you’ll be cutting but it’s less expensive, safer and easy to use.

Miter boxes come in different types of material. The most commonly used ones are the plastic ones but they do come in metal or wood. Each type can do something that another may not be able to do.

Difference Between A Miter Saw And A Miter Box?

The difference between a miter saw and a miter box is that the miter saw is a power tool. The miter box on the other hand is used with a hand saw and the box itself is far smaller and more portable.

If you’re just getting started in woodworking and can’t decide if you need a miter saw or not. Here’s a couple things to consider. The power miter saw is more or less nothing but a luxury, you don’t need it to cut miters when a miter box will do everything you need and is every bit as good.

If you’re limited on space in your workshop, then the miter box is a great alternative due to its small size. The miter saw isn’t a huge power tool but it can get in the way especially when working in a tiny area.

Basic Stanley Mitre Box: If you’re doing some renovations to your house such as putting in new baseboard or even chair railing a standard mitre box will do the job. It does a good job of cutting miters for picture frames too.

You can buy these at your local hardware store for pretty cheap. I would suggest looking into the stanley miter box. It comes with all of the angles that you’ll need to cut nice crisp angles.

This type of miter box also comes with cam pins so that you’ll be able to hold down the material as you cut. This type of box can cut ninety, forty five and twenty two and a half degree angles. If you need to bevel an end of a board it’s capable of doing that too.

The stanley miter box is small so that you can set it up anywhere you want. You just have to make sure that you screw the base down to some kind of wood surface or use clamps so that it doesn’t slide around as you cut.

How To Use A Stanley Miter Box And Saw

Adjustable Angle Clamping Miter Box: These types of miter boxes are a step up from the small plastic miter boxes. The adjustable miter box allows you to cut more angles than just the ninety, forty five and the twenty two and a half degree angles.

It’s also physically a little bit bigger and sturdier since it’s not made of plastic but rather steel. Though it’s bigger but not to where it’s inconvenient to move around from one place to another, plus it can do more things.

One thing that it can do is cut multiple pieces of wood to the same length without having to measure every piece. This is accomplished through the use of saw stops.

You can also set the depth of a cut with the adjustable miter box as well if you don’t want to cut all of the way through the wood. Which is something that can’t be done with the plastic Stanley mitre box.

Is A Tenon Saw The Same As A Back Saw?

The tenon saw and the back saw is more or less the same thing. It just depends on who you ask.

The tenon saw works well for cutting tenons to fit a mortise because the fit has to be pretty precise. The tenon saw also does a really good job of cutting miters.

As a matter of fact if you buy the Stanley miter box that comes with the saw it’s probably going to be a tenon saw. This saw is capable of cutting with the grain or cross cutting.

They have closely spaced teeth that make it much easier to cut through wood. The back saw has a rib at the opposite edge of where the teeth are. This keeps the back saw from bowing as cuts are made. Plus it adds a little bit of weight so you don’t have to apply a lot of downward pressure to make a cut.

So the plastic and adjustable angle clamping miter boxes are great for cutting standard sized baseboards and trim. However they do have limitations when it comes to wider pieces of wood. If you need to cut miters on wider material that exceeds the dimensions of the miter box, you have two choices.

Option one, you can upgrade to a powered miter saw which again is going to cost way more money just to install whatever trim your cutting. If you decide to buy the miter saw it’s more than likely not going to get much use in the future if that’s all you plan on doing as far as miter cuts.

Option two, and the less expensive option, why not build your own miter box to your desired needs? All you need is a few short pieces of plywood for the box itself and a speed square to get all of your angles cut into the box.

I think the miter box that you buy or build will depend on the person that plans to use it. Each one of us is different and unique in our own way.

For me, if I was just starting out with a small project and didn’t know anything about how miters are cut and how they’re supposed to fit together I would buy the plastic Stanley miter box. Especially if I’m not going to be using it on a regular basis

The benefit of wood mitre boxes is they have a longer life than plastic mitre boxes.

How To Make A Wooden Miter Box

How do I use a mitre box and the saw that comes with it?

A good thing to do here is mark an X on the waste side so you don’t get confused as to which piece you want to nail to the wall.

If you don’t have the yellow pegs, you can still hold the piece in place by using your hand. Just make sure not cut yourself with the saw.

From here line up the saw with the mark you made. Before you start cutting though, be sure to cut slightly on the scrap side which should be the side you put an X on.

It’s difficult to just start sawing away because the teeth tend to grab which will give you a jagged edge at the top of the cut.

Miter Boxes The Good And Bad

make your own mitre box